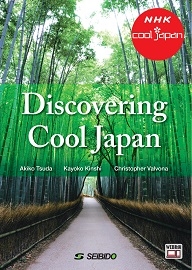 See Contents Sample Video
Request Sample Notification of
selected text BUY
※ We are unable to supply texts to students or the general public.
We may not be able to respond to requests from teachers who teach privately or have small classes.

A look at Japanese culture through the NHK program Cool Japan. Listen to global English from speakers from 29 countries.

This text has been adapted from NHK's popular program "Cool Japan." A number of foreign residents look at aspects of Japanese culture and technology that Japanese take for granted and decide how cool they are. This text provides the chance to explore the charms and mysteries of “cool Japan.” The units are structured in two parts. First, participants go out to report on an aspect of Japanese culture. This is followed by a studio discussion where the people, from 29 different countries, talk about the difference between Japanese culture and their own. In addition to exposing learners to several varieties of global English, this course shows the virtues of Japanese culture and develops the ability to convey it to the world in English. It comes with mid-term and end-of-term tests as well as mini-tests for each chapter.

for HIGHSCHOOL and COLLEGE

How to request samples etc.