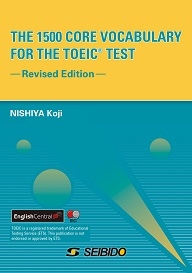 See Contents Sample Audio MP3 Download
Request Sample Notification of
selected text
BUY
※ We are unable to supply texts to students or the general public.
We may not be able to respond to requests from teachers who teach privately or have small classes.

A revised new version of the popular textbook The 1500 Core Vocabulary for the TOEIC® Test. Ninety-seven percent of TOEIC® L & R Test words are learned at school. By adding 300 words taken from actual TOEIC® tests to this school vocabulary, we have brought the total up to 1200 words, thus achieving 98% coverage of TOEIC® test vocabulary. Words that often appear on the test, as emphasized by the number of questions in which they occur, are arranged in three levels. The example sentences, based on the contents of TOEIC® tests, are simple and easy to remember. In order to increase the retention rate, the example sentences are actually spoken in EnglishCentral. The teacher’s manual contains 71 word tests.

for HIGHSCHOOL and COLLEGE

How to request samples etc.